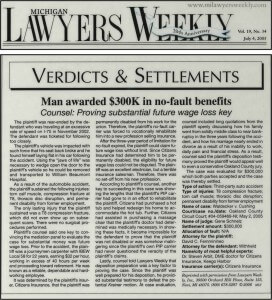 In this third-party auto accident case, the plaintiff, represented by David C. Femminineo, was violently rear-ended on Michigan’s I-75 by the defendant who was traveling at a high rate of speed. The plaintiff needed to be removed from his car with the “jaws of life” and the injuries he sustained ultimately landed him on permanent disability.

Mr. Femminineo is featured in Michigan Lawyers Weekly for proving that substantial future wage loss was a major key in garnering the $300,000 settlement for this plaintiff. Also crucial to the case: The plaintiff’s own insurance carrier never challenged the veracity of the plaintiff’s permanent disability claims and the carrier went to great efforts to rehabilitate him; the plaintiff’s deposition testimony made clear how drastically his personal finances and relationships were challenged following the accident.