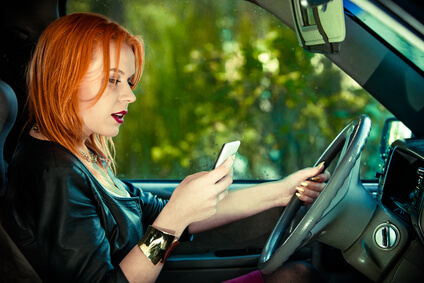 Distraction: The Halloween Costume Too Many People Are Wearing

The most recent data from the U.S. National Highway Traffic Safety Administration estimated that, in 2012, there were 421,000 people injured in auto accidents involving a distracted driver, an increase of 34,000 injuries from the previous year. In both years, over 3,300 people lost their lives, and it is almost guaranteed that distraction-caused injuries are underreported. According to distraction.gov, distracted driving is an epidemic.

We live in a world of distracted humans. You’re more likely to see people with their heads down staring at a mobile device than with their heads up looking straight ahead, looking you in the eye, or paying complete attention to what’s ahead of them and around them on the highway. Distracted driving is one of the top causes of car crashes, and Michigan police report that this distraction manifests itself as swerving, following too closely, and speeding.

Young people in particular are among the most distracted, with drivers in their 20s making up over 25 percent of the distracted drivers involved in fatal auto accidents. When police set out for dedicated enforcement for distracted driving, they’re not only looking for people who are texting or talking on their phones – though that is of course at the top of the list. What they want to enforce is awareness – it’s not just what your hands are doing, it’s how your mind is occupied while driving. When your biggest focus isn’t on the task at hand, you can’t react fast enough to avoid causing an accident.

The Big iPhone Contributes to a Big Problem

Every fall, Apple rolls out a bigger, better iPhone or two, and the most engaged members of society scoop up this technology and play with it everywhere, including behind the wheel. In 2011, the Department of Transportation estimated that 660,000 Americans across the country were on their phones while driving at any point during the day. That was when Apple only sold about 18 million iPhones per quarter. Now they sell about 40 million per quarter. You do the math.

Distracted driving can be prevented, but it’s difficult to change an entire culture that’s addicted to their mobile devices, no matter where they are. If you or a loved one has been involved in an auto accident at the hands of a distracted driver, contact Femminineo Attorneys PLLC to speak with personal injury attorney David C. Femminineo about your case.