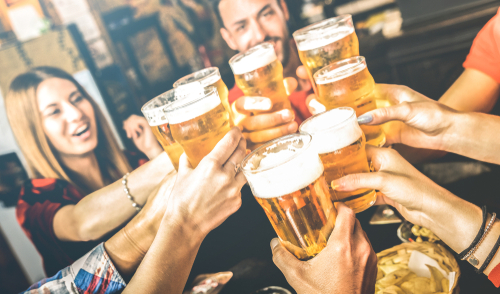 Avoid an Auto Accident During the New Year’s Holiday Period

The Danger of Car Accidents on Blackout Wednesday

Blackout Wednesday has officially become a thing. And it’s not a good thing. Thanksgiving Eve has always been a time of togetherness, when kids come home from college, families get into town, and busy adults know they’ll finally have a day off work. It’s a permissive time of year and many people choose to celebrate it by drinking – too much. The result, among many other awful side effects, can be fatal car accidents.

The Origin of Blackout Wednesday

The night before Thanksgiving has long been a time of happy reunions. Unfortunately, alcohol plays a major role. Blackout Wednesday got its name not as a play on the Black Friday shopping holiday, but because so many people drink to the point of blacking out. It’s not a tongue-in-cheek name, it’s a frightening one that refers to binge drinking which can result in memory loss and unconsciousness – and, unfortunately, it is quite accurate.

When the drinking is kept at home and no one gets on the roads, there is no risk of car accidents. Most people, however, want to go out and enjoy being out together. In some cities, Blackout Wednesday is a more popular night to party than even New Year’s Eve, Independence Day, or Saint Patrick’s Day. In other places, it’s the worst drunk driving night of the year.

Drunk Driving Is Always a Problem

It doesn’t matter what day of the year it is or what holiday is going on, you’re always sharing the road with drunk drivers. Plenty of people drink then get behind the wheel without a second thought for those around them. They’re only focused on getting themselves to wherever they want to be, at any cost.

Drunk drivers have poor reflexes, they’re tired or close to passing out, they’re unfocused, they’re distracted, they may even be using their phone while driving drunk. Compound all of this distracted driving with the darkness of Blackout Wednesday, also known as Drinksgiving, and potentially a car full of people, and anyone who gets home safely without getting in a car accident can consider it a miracle.

The Reality of Car Accidents

In 2020, 38,680 people died in motor vehicle crashes, according to estimates from the National Highway Traffic Safety Administration (NHTSA). That is the largest protected number of deaths since 2007, despite there being over a 13% decrease in the number of miles traveled from the prior year. Even though plenty more people were staying home in 2020, that didn’t mean things were so great out there on the roads.

With fewer cars on highways, people drive faster and are less observant of traffic laws, making the roadways less safe for drivers and passengers, as well as pedestrians and cyclists. As life slowly returns to normal and traditions like getting together at a bar on Thanksgiving Eve come back to life, the new dangerous driving habits combined with the inherent dangers of drinking and driving are colliding to make for one very treacherous night of the year.

If you are involved in an automobile accident in Michigan, contact Femminineo Attorneys in Mt. Clemens, MI, to discuss your case.