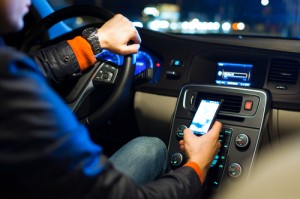 Keeping an Eye on Your Teen Driver Just Got Easier

Answering a phone call while driving is common. It’s not safe, but plenty of people do it, and they have a Bluetooth mechanism available to assist them so their conversation can be hands-free. Texting is also becoming less distracting with apps that read your messages to you, recognize voice commands as a text response, or that silence messages while you’re driving so you’re not tempted to take your hands off the wheel to read what’s incoming. None of these practices are recommended, but you might be surprised to learn that it’s more than phone calls and texts that have American smartphone users distracted while driving.

Social media scanning and even video chatting are apparently obsessions for many motorists, according to a recent study released by AT&T. The poll surveyed over 2,000 motorists and smartphone owners ages 16 to 65 who drive at least once a day.

Here are the scary findings about what people are doing while driving:

And here’s the real kicker: 28 percent of smartphone users browse the internet while driving. Seriously? How often have you been online sitting on the couch at home and suddenly looked up only to realize 30 minutes had rolled by? Web surfing distracted you so completely that you lost track of time. The thought of anyone attempting to browse the web while also operating a vehicle is mind-numbing.

Overestimating the Ability to Multitask While Driving

And, as it turns out, teens aren’t the only drivers who believe they’re infallible behind the wheel. Twenty-seven percent of people in the AT&T survey who shoot video while driving believe they can do it safely. It’s fair to say that far too many drivers overestimate their ability to multitask while driving.

The Centers for Disease Control and Prevention reported that over 3,300 people were killed in auto accidents involved a distracted driver in 2012. Distracted.gov reports that 660,000 motorists are using their smartphones or an electronic device behind the wheel at any given moment.

Phones are getting smarter. But it would seem that drivers are getting dumber. Just because you have successfully driven while carrying out a smartphone task in the past doesn’t mean that will be the case in the future. Don’t take a chance. Put the smartphone away while you’re driving and pay attention to the road.

If you have lost a loved one in a fatal auto accident because of distracted driving, contact David Femminineo today to discuss your case.