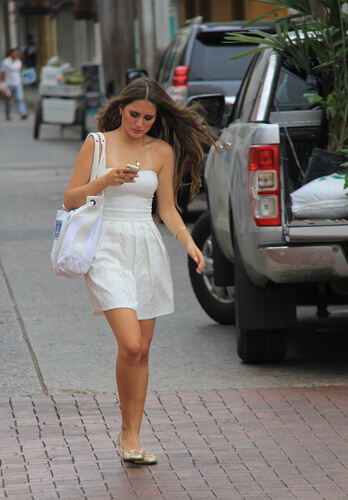 Keeping an Eye on Your Teen Driver Just Got Easier

Do You Know the Teen Car Accident Risks on Prom Night?

You’re Not That Good at Multi-Tasking: The Danger of Distracted Walking

Texting and driving is an auto accident waiting to happen, but what about walking and texting? Being distracted by your smartphone in any situation means you’re not paying attention to the task at hand – and that can include putting one foot in front of the other. Distracted texting has become such a pervasive problem that in New Jersey it may soon be a crime to tap away on your smartphone while you’re walking.

Last week, the New Jersey Legislature was presented with a bill that would fine pedestrians who are focused on their smartphones instead of on the sidewalk, according to NJ.com. The number of collisions between pedestrians and vehicles nationwide is steadily rising. Between 2005 and 2010, injuries that involved walking and using a smartphone at the same time more than doubled. This year, 32 pedestrians have already been killed in New Jersey. About 10 percent of pedestrian injuries are due to distracted walking.

Texting and Walking: The Danger Is Real

What if people claim that there is no danger with texting and walking, particularly in busy cities where the flow of foot traffic simply shuffles you along? What about the people who claim that they are more than adept at multi-tasking? According to a 2012 Pew study, most folks have bumped into something or someone (also on their phone!) while walking and using their phone. Texting walkers are 61 percent more likely to go off course than undistracted drivers, according to a Stony Brook University study.

Don’t believe it? A 2012 study co-authored by Dr. Beth Ebel, associate professor of pediatrics at the University of Washington, found that people who text and walk are four times less likely to look both ways before crossing the street. They’re also less likely to obey traffic signals or cross at designated crosswalks.

Can you share the road? Improving bike safety in Michigan >>

Putting a Stop to Texting While Walking

Texting and walking bans like the one on the table in New Jersey have already been presented and failed to pass into law in New York, Nevada, and Arkansas. But some cities in Utah have been able to impose civil fines for distracted walking near trains. In Rexburg, Idaho, there is a ban on texting while in a crosswalk. And some states have added distracted walking to its finable jaywalking violations.

And, of course, there is always that thing called personal accountability. Being aware that you have a texting obsession and making a conscious effort to put the phone away whenever you’re traveling – by car or by foot – can help save your life and those of others. If you need help being reminded of the need to be more careful about your smartphone behavior, there is, not surprisingly, an app for that. Type n Walk is designed to allow people to text while the camera phone shows what’s right in front of you. The app is promoted with the marketing message that this view, combined with your peripheral vision, is just enough visual information to help you avoid obstacles.

Can an app prevent texting while driving? >>

Don’t doubt that distracted walking is a problem. The number of pedestrians killed in auto accidents in 2015 is expected to be the largest annual increase ever in the number of fatalities involving people on foot, according to the Governors Highway Safety Association (GHSA). More pedestrians are using their smartphone and, combined with more distracted drivers using their smartphones while operating a vehicle, the combination can be, and often is, deadly.

If you or your loved one have been involved in an auto accident because of a distracted pedestrian, contact David Femminineo today to discuss your case.